In 1956, a team of Europeans, Oil (Black Gold) magnates in the form of the Anglo-Dutch Oil Giant, Shell D’Archy, now Shell Petroleum Development Company (SPDC) arrived Gelegele (Gelegele-gbene) to explore for Oil having obtained Oil exploration license from the then Colonial Government in Nigeria.  After a brief exploration for Oil in Gelegele, Shell D’Archy left.  In 1963 another Oil Company, Phillips Oil Company (Nig) Limited, a subsidiary of Phillips 66 of Houston, Texas, and San Francisco, California, U.S.A arrived Gelegele (Gelegele-gbene) having obtained license from the Government of Nigeria, to explore for Oil in OML 96.  Phillips Oil Company made a huge and stunning discovery of a large and commercial deposit of Oil and Gas at Gelegele Oil field which was described by the Nigerian Press as a “Sea of Oil”.  Oil exploration and exploitation activities were temporarily put on hold in Gelegele Oil Field as a result of the Nigerian Civil War between 1966 –1970.  At the end of the civil war, Phillips Oil Company (Nig) Ltd returned to Gelegele Oil Field and started Oil Production.  In 1979, Phillips Oil Company (Nig) Ltd built its Flow Station at Gelegele (Gelegele-gbene) and started the production of Crude Oil. 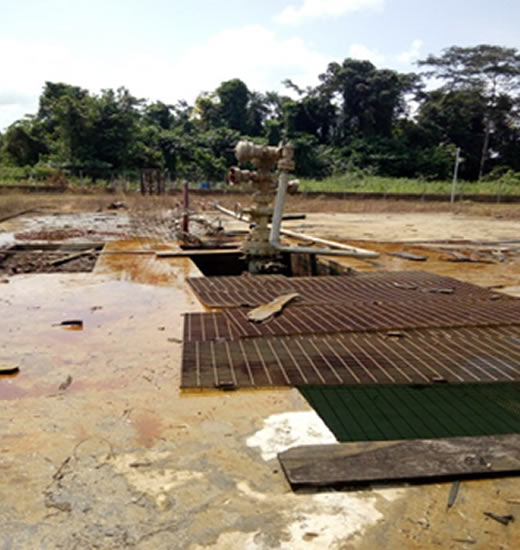 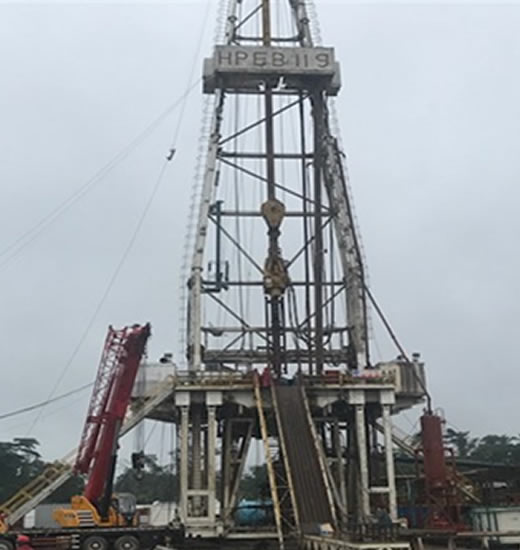 THE CHALLENGES OF OIL EXPLORATION AND EXPLOITATION IN GELEGELE (GELEGELEGBENE) COMMUNTY. 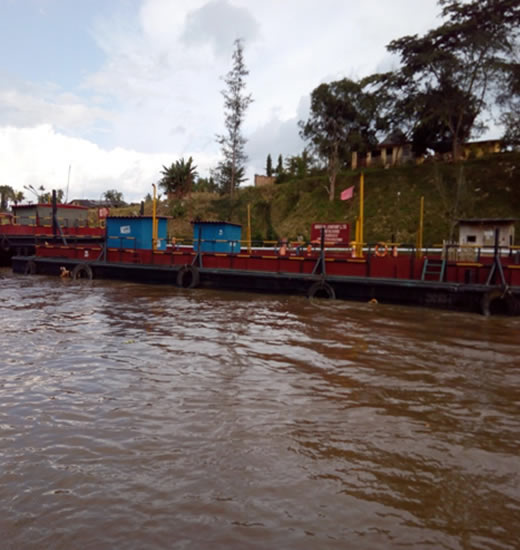 Our analysis in this website is based on information obtained from

From The Executive Summary Of Dubri Oil Company Ltd, Draft Environmental Impact Assessment (Eia) Report 2000 For The Re-Location Of The Flare Stack/ Site, it is recorded that the following Particulate matters or gaseous oxide are produced into the Gelegele environment at a varying huge quantities. See table 1 below:

NOTE: We are sure the concentration of these noxious gases in the   Gelegele environment since 2000 till now must have increased exponentially.

Carbon monoxide (CO), Oxides of Nitrogen (NO) and volatile organic compound (VOCS) according to the Intergovernmental panel on climate change (IPCC) are “reactive”.  The three of them produces tropospheric ozone (O3) which increases climate change.

Experts, (Canadian researchers, Alberta Canada), United States Environmental Protection Agency (U.S. EPA) have found that exposure of humans to the above particulate matter at a distance of 1,325m and at very low concentration could cause the following Health impact.

Other diseases suffered by exposure of persons to gaseous components and Crude Oil are:-

Gas Flare at the heart of Gelegele Community 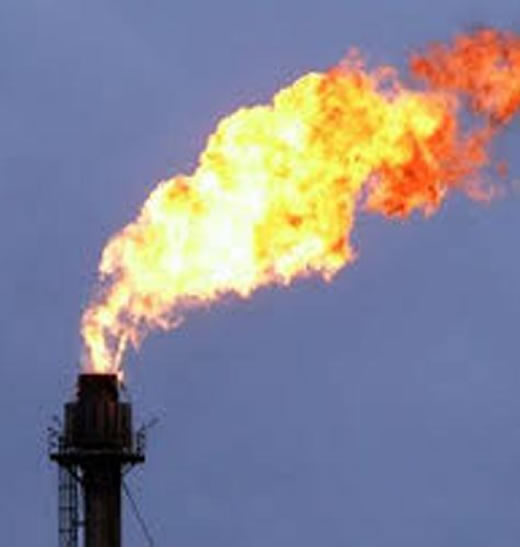 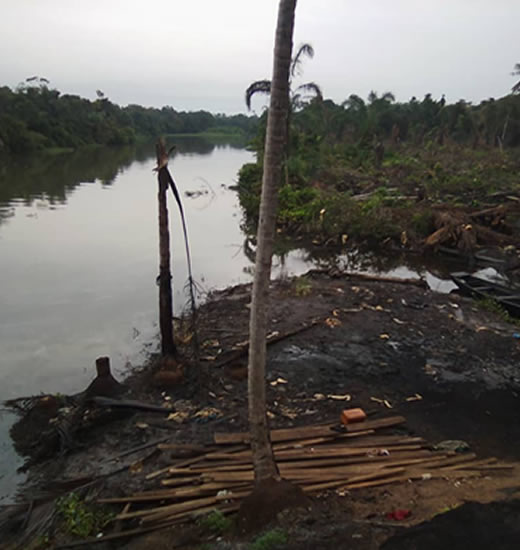 Thus Gelegele people suffer death and all the above diseases as a result of Gas Flare and Crude Oil exposure. The Oil Company flare stack/site is located at the Center of Gelegelegbene Community, within close proximity to dwelling houses.

From the same, Dubri Oil Company Environmental Impact Assessment (EIA) report 2000 for the re-location of the flare stack/site at Gelegele, Edo State, recorded that the temperature of Gelegele and its adjoining communities increased to 35.4oC. This is equivalent to the scourging temperature of the Sahara desert in Aghades in Niger Republic during the dry season. This kind of temperature increase occasioned, gas flare does not only affect human but also the vegetation, wild life and aquatic lives. This unusually high temperature leads to migration of wild lives and aquatic lives from Gelegele and its adjoining communities.

The distance of the Gas flare stack to the farthest residential building in Gelegelegbene is less than 600m and the closest residential building at Gelegele to the DOCL flare stack is about 20m. For an exposure to this flare impact of Gelegele people, houses and the entire environment, for a time period of over 30years, leaves the entire Gelegelegbene community destroyed, houses fallen, etc. Gelegele is facing extinction.

ACID RAIN/SOCIO-ECONOMIC IMPACT: The particulate matters such as SO2, NO2 etc. produced from the Oil Company, gas flare combines with atmospheric water to produce acid such as Sulphuric Acid (H2SO4) and Nitric Acid (HNO3).

According to the said Dubri Oil Company Ltd Environmental impact Assessment (EIA) report 2000 for the re-location of the flare stack/site in Gelegele, the pH of the rainfall in Gelegele and the acidity of the soil is 3.83.  According to the Nigeria Meteorological Agency NIMET, the normal pH of rain water is 5.6. It therefore shows that the rainfall in Gelegele and the surface water body is very acidic and unsafe for human consumption. Yet the Gelegele people drink from the surface water body at Kalapou, Ikpiri-kpiri and Toru-kubu River in Gelegele. Also because of the acidic nature of the water bodies at Gelegele, the aquatic lives (Fishes and Reptiles) have either migrated or are extinct. The Acidic nature of the soil has reduced agricultural productivity. Of course there is also the regular spillages of Crude Oil into the river which has greatly destroyed fishes and other marine lives. There is poverty untold at Gelegele as a result of migration of wildlife and aquatic lives and low agricultural yield occasioned by Oil Exploration and Exploitation.

Acid rains in Gelegele are responsible for the decline and die-back of forest trees. Another costly impact of acid rain in Gelegele is the accelerated weathering of building materials especially marble and concrete. Metal too corrodes at faster rate at Gelegele because of their exposition to acid rain.

Flaring of associated gas produces Carbon-dioxide (CO2) and venting of methane (CH4) which is the main Green House Gases (GHG). It is a known scientific fact that the over concentration of Green House Gases in the atmosphere reduces the stratospheric Ozone (layer) and increases the tropospheric Ozone layer. As the thickness of stratospheric and tropospheric Ozone layer changes, ultra-violet radiation, which is an invisible radiation, reaches the earth surface. The increase in global temperature is known as global warming. As the earth gets warmed, the climatic conditions of the globe also changes.

The Intergovernmental Panel on Climate Change (IPCC) – a Scientific body setup by the United Nations (UN) and the World Meteorological Organization to consider climate changes, in its 2001 Third Assessment Report said that the global average surface temperature increased by about 0.6C over the 20th Century that it was 66 – 90% confident that most of the observed warming over the second half of the century was due to the increase in Green House Gases concentration, and projected that the temperature would increase from 1970 – 2100 by 1.4 to 5.8oC. It also stated that global mean sea level is projected to rise by 0.09 to 0.88 meters between 1990 and 2100 due primarily to thermal expansion and loss of mass from glaciers and Polar Ice-caps.

“The impact of global warming is such that we have no hesitation in describing it as weapon of mass destruction”.

The flare stack which is located within a close proximity to residential buildings in Gelegele makes great vibration sound/noise. This vibration sound/noise is very deafening. This vibration sound/noise also has an earth shaking effect. This creates crack and breakage in the buildings which eventually collapses. The vibration noise/sound of the flare stack leads to migration of wildlife and aquatic lives. In paragraph 2.1 of the EIA Studies of 2000, it is stated that “the heat and noise generated from the gas flaring impacts negatively on people working in the flow station and nearby GiliGili Communities”. Most people in Gelegele now have hearing problem as a result of the vibration/noise of the gas flare.

Therefore, Gelegele Community directly or indirectly lost its existence to Oil Explorations and Exploitations and we are tirelessly working head with Governmental and Non-Governmental Agencies to put a stop to Gas Flaring in Gelegele community and Niger Delta at large.